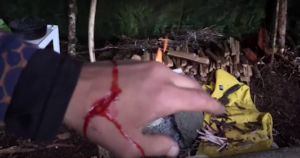 Spend any amount of time in the great outdoors and you’re bound to get a few scrapes and knicks and cuts while you cover ground.

It’s important to take safety precautions seriously, especially when in a remote location, far from help. A small wound in a big city with hospitals on every nearby corner may not be life threatening. A trip to the hospital for some stitches and you’re back to normal in no time.

But out in the mountains and great outdoors, small wounds should be taken seriously so it doesn’t become infected and ruin your adventure.

Getting into the habit of immediately stopping and patching up a minor cut helps keep it from getting unnecessary debris on the wound and increasing the chances for infection.

Here’s how to do it:

Is the bleeding controllable with direct pressure? If the answer is no, stop what you’re doing and break out your tourniquet. You need to act fast. Even a small wound that continuously bleeds can become dangerous over time.

Inspect the wound for depth and width. It may need stitched if it’s large enough, and for that, you’ll need to go to the hospital. Don’t try to do it yourself, you need specialized gear and prior training to pull it off.

Don’t apply super glue or even butterfly bandages unless you have no other choice. If you do apply these, you run the risk of increasing the chance for infection by sealing debris inside.

Get into the habit of taking care of even small wounds right away. The sooner you do, the less likely you’ll forget. Having a good stock of band aids in your kit keeps from having to hike all the way to camp to treat yourself.

After you have controlled the bleeding with direct pressure and assessed the wound, it should be flushed with large amounts of water. This is simple in the field if you have a cheap water bottle with a few holes punched in the lid. Spray the water forcefully into the wound to flush away debris that will cause the wound to become infected.

How much water should be used in the flush? Flush it with so much water you think is surely enough, then double it. Better too much then not enough.

We want the wound to be clean and dry, so bacteria has a harder time multiplying and causing infection. You don’t need something sterile (although it wouldn’t hurt) but make sure its clean. Carefully pat the wound dry, then apply an antibiotic ointment to increase defense against infection.

Band aids and gauze are great items to keep nearby and on your body is even better. Apply the dressing snugly, but don’t wrap it so tight it becomes a tourniquet and reduces blood flow to the wound. You would only want to do that if the bleeding is uncontrolled with direct pressure.

At the end of every day, before you settle into your sleeping bag for the night, take a few minutes to change your band aids or dressings. I know you may be bone tired after a hard day in the mountains, but it’s a small sacrifice for avoiding infection.

Remove the bandage for a short time and allow it to dry to the open air. Sweat and moisture can collect underneath and create the perfect environment to grow bacteria. Clean the wound carefully with soap and water, pat dry and reapply ointment and a new clean bandage.

During every wound reassessment at the end of the day, pay attention for signs of infection setting in. Even if you do everything right, there’s still the risk it could turn nasty. Here are some things that might indicate infection:

The Basecamp Trauma and First-Aid Kit

If you recognize any of these signs, see a doctor for evaluation.

If you would like a trauma kit stocked with all the essentials you’ll need to teat wounds from minor to severe, check out the Base Camp medical kit.

If you want to learn more about the items in the kit and how to use them, check out our free training course.