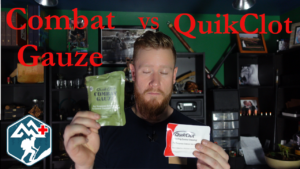 One of the things I say with regularity is how important it is to learn wound packing. But if you haven’t heard, here’s why:

Wound packing is an essential skill because a tourniquet (TQ) cannot be used to treat all life-threatening bleeding. Don’t get me wrong, TQs work great for arms and legs, but if you’re bleeding from anywhere else, such as your neck or groin, wound packing is the only thing that will save your life.

I’ve gotten some questions recently asking what I think is better, QuikClot, or Combat Gauze. There are a few differences that might help you understand what it is you’re carrying in your trauma kit.

If you know that both these products are developed and produced by the same company, then you’re already ahead of the group.

For the most part, these are the exact same product, minus a few details. Both products are saturated with a hemostatic agent called Kaolin, a mineral collected from a type of clay which helps the body’s natural ability to clot. This clot is important for plugging up the severed artery and keeping blood in your body where you need it most.

If you would like to know more about wound packing, or how to use any of the other items in your trauma kit, check out our free online course Emergency Trauma Response.

If you’ve ever spent time around the military or law enforcement, you will probably know the name Combat Gauze. This is a product I used on numerous occasions, and I was happy to have it in my trauma kit.

This gauze is vacuumed packed and sealed, hard as a rock, to help get as many as possible into a medics combat trauma bag. There is a lot of gauze included in a single package, with 4 yards of material where the civilian rolled version is only 1.3 yds.

Rolled QuikClot has all the hemostatic goodness you want, but with only 1.3 yards of material

This is important because the severity of the wounds sustained in combat are often catastrophic and might require the whole package, and sometimes more, depending on how big the wound is.

I advocate carrying more than just a single package of gauze in your kit for this reason. The wounds you encounter may be so large you need more than the one.

Combat Gauze isn’t sold to the public and only intended for use by law enforcement or military, so it’s especially difficult to find and/or purchase. Combat Gauze is packaged in OD green, and a blue strip can be seen running the length of the gauze after it’s been removed from the package.

This blue strip is woven into the fabric of the gauze because it will appear in an x-ray after the casualty is taken to the hospital. This is helpful because of all the hand-offs that occur when a military member is transferred from medic, to flight crew, to ambulance, to medical treatment facility and somewhere along the way it might be forgotten about.

The blue radiological strip helps to prevent leaving the gauze inside the casualty and causing complications.

This is far less of a concern for civilians, so the blue stripe has been left out of the civilian version, identifiable by the white and red packaging. 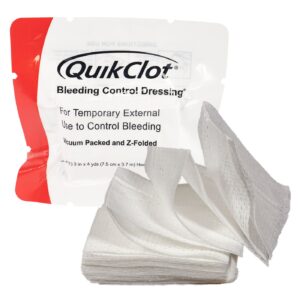 Z Folded Quikclot is almost exactly the same as Combat Gauze, minus the OD green packaging and blue x-ray strip.

If you are interested in carrying the most amount of gauze you can, (and why wouldn't you?) then you can purchase the Z folded QuikClot that is almost exactly the same as Combat Gauze, minus the OD green packaging, and the blue x-ray strip.

But other than that it is exactly the same and will work well to help you keep some alive.

Just to recap so everyone is clear: