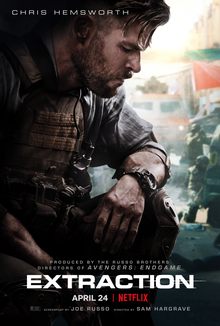 This article contains spoilers. If you haven’t seen the movie, go check it out first so I don’t ruin it for you.

When I was a kid, my dad, a career firefighter, used to stand in the doorway of the kitchen when we watched movies and point out all the fake parts, then carefully detail the way it works in real life.

At the time, I appreciated his thoughts on the movie even less than the rattlesnake stew he made once as an experiment.

Sometimes you don’t want to know how that explosion would have really looked, you just want to enjoy a good film and block out the real world for a bit. Reader beware.

Extraction is the next title in a new sub-genre of action films popularized by the John Wick franchise. These films combine good choreography with realistic weapons and tactics to create a film with more teeth and grit then the market was originally accustomed.

This realism coupled with brutal fight scenes shocks the audience and submerges us into the depths of story until we can finally up for air after the credits roll, if done right.  The question then becomes, “Did Extraction do it right?”

The movie stars Chris Hemsworth, who’s best known for his role in the Avengers franchise as Thor, The God of Thunder. According to Hemsworth, he’s never been in better physical shape for a movie, but only takes his shirt off once – and you just see his scarred and tattooed back – sorry ladies.

Hemsworth pulls off a believable character in a predictable plot line you’ve probably seen a dozen times before. It’s one that’s recycled every few weeks for the next action movie.

It’s the story of a troubled badass who, for reasons of his own, decides to protect some poor soul from bad people trying to exploit them for nefarious reasons.

Even though I’ve seen this exact plot in so many other movies, I still found it enjoyable to watch because the writer (Joe Russo) did a reasonable job of making the characters interesting and relatable.

When the audience learns why Rake takes this suicidal contract, we are left both with disgust and horror that he would voluntarily go to war in order to avoid watching his young son die of cancer.

But when the audience sees how heartbroken he is over that choice, our hearts break as well, creating a more dynamic and sympathetic character. This also provides Rake’s motivation for seeing the job through to the end despite the risk and difficulty.

The dialogue is a little on the nose, but it gets the job done. I would have liked it better if it was a little more subtle. Often the characters go on to comment on topics that would have been better left unsaid so the viewers could draw their own conclusions, but I’ve seen worse.

Now, before I get into this, let me first say that we (the audience) want a certain amount of unrealism when it comes to the movies we watch. If movies were too much like real life, we wouldn’t bother to watch them. That said, I appreciate when a writer does the due diligence to research the world the story takes place in.

When I see something wildly unrealistic in a movie set in the real world, it breaks me out of my immersion and reduces the impact of the story, and my enjoyment. It just feels lazy.

How hard could it be to do a little research or ask someone how it’s really done? Spend the Craft Services budget on a quality consultant instead and let the actors bring some snacks from home if they get peckish.

The John Wick movies starring Keanu Reeves, got the gun play right and it’s one of the reasons they did well despite the abysmal storytelling. (John Wick – great action, bad story)

During the action scenes of Extraction, fingers were off triggers unless shooting, reloads looked passable, and the weapons and gear were set up realistically, for the most part.

The way Rake mows through bad guys seems… possible, if highly improbable. I mean, chances are good someone would’ve got off a lucky shot or turned a corner when he wasn’t looking, right? But we ignore that since it’s so well done.

In one especially well-done scene, Rake is in a close quarter fight with three cops. During the mayhem, someone grabs the slide of his Glock as it fires which keeps the slide from cycling and ejecting the spent cartridge, rendering the weapon useless. When Rake realizes this, he rips the gun away from his attacker, uses it as an impact weapon to gain space, then racks the slide off his plate carrier to fix the malfunction and proceeds to lay waste to his opponents.

You have to look close to catch it, but I appreciated this little tidbit. It’s a nod to those in the know and tells us the director (Sam Hargrave*) actually cares about his art form and the movie isn’t just a cash grab.

**(Extraction Director, Sam Hargrave, made an appearance in the movie as a minor character, and, was eventually shot in the head)**

Being a medic, scenes depicting the treatment of combat trauma especially stick out to me. One of my favorites is in First Blood Part 3 when ‘ol John Rambo pours gunpowder into a hole in his side, then lights it. To cauterize the wound, of course.

I’m at a loss for how this “treatment” made it any better. The dead burned tissue would have to be cleaned out (debrided) with a bore brush or the wound would become infected, REAL quick.

Extraction does a better job when Rake receives a wound to his arm after a nasty knife fight and instructs the drug lord’s son to correctly apply an Israeli Bandage to him. Another small detail, but I appreciate that they paid attention to it.

Someone unfamiliar with combat trauma medicine might assume a tourniquet would be the best choice, but it wasn’t bleeding badly enough to warrant the use of a tourniquet and was correctly treated with the pressure dressing.

The Israeli Bandage is a pressure dressing used to stop heavy, but not currently life threatening, bleeding which could eventually become dangerous if not properly controlled. The Israeli Bandage has a plastic clip on it that applies additional pressure over the wound site to stop the bleed.

If bleeding isn’t controlled and blood is soaking through the bandage, treatment should be upgraded to a tourniquet placed 2-4 inches above the wound.

The Israeli Bandage is a little on the large side, so it doesn’t pack well into small trauma kits which is why we stock our kits with the smaller ETD from NAR. But having a few Israeli Bandages in larger kits in your home and vehicle is a great idea. We sell these in our online store for under $10.

Over the course of the movie, Rake is shot, cut, blown up, stabbed, thrown out of buildings, hit by cars, and assaulted in almost every conceivable way. I was asked if someone could really take that much damage and keep going.

I doubt it. Even one broken bone would likely stop him where he lay. Even if there were miraculously no fractures, there would certainly be muscles, ligaments, and tendons stretched far past their limit. Not to mention the amount of trauma his poor brain must have taken. You don’t just get up and walk that stuff off. But, again, we forgive this because it’s just so damn cool.

Was Extraction Any Good?

I liked it. No movie is perfect, and I think the story was dumbed down a lot to make it appeal to a larger audience, but it was interesting and kept my attention. The obvious attempt to add small details didn’t go unnoticed and made the movie better.

The tactics were largely Hollywood “artistic license” but not so outlandish as to be wholly unbelievable.

My Question for You is This:

When the drug lord’s son, Ovi, breaks the surface of the water at the end of the movie, is it Tyler Rake watching him just out of focus? Let me know what you think in the comments down below.

4 thoughts on “Extraction: How to Patch Yourself Like a Badass”