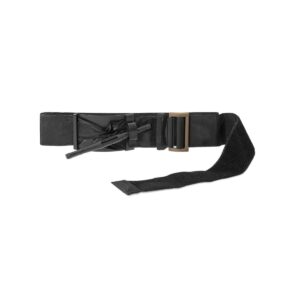 There are lots of options out there for tourniquets and I’m often asked which I think is the best. I also hear lots of opinions about which tourniquet is on top and why, and which TQ’s suck and why.

Over the next few weeks, we’ll investigate each TQ in depth to help you decide on which is the right one for you. This week we're looking at the Tactical Mechanical Tourniquet (TMT) by Safe Guard Medical which many think of as a hybrid between some of the more well-known TQs on the market today.

If you’re interested, we've already looked at the CAT by North American Rescue, and the SOF-T, by Tac Med Solutions.

Next week we'll be examining the RATs Tourniquet. When available, a link will be posted HERE.

Every TQ has its pros and cons, it’s strengths and weaknesses that make it better in some circumstances than in others. Each of these tourniquets approach the problem of bleeding control in similar methods, but in slightly different ways.

A tourniquet works by wrapping around the limb and clamping down major arteries to long bones and preventing blood loss, hemorrhagic shock, and death. A Windlass Tourniquet is tightened by turning a stick which tightens a strap and constricts blood vessels, preventing the flow of blood past the strap.

An Elastic Tourniquet is a stretchy band wrapped tightly around the limb and constricting blood flow past the band(s). To be considered for this list, each of these TQs must be approved by the Committee on TCCC (Co-TCCC). (Except for 2, one I love, and the other I hate…) Let’s break down em down and help you pick the right tool for the job.

Part of the Co-TCCC current list of approved tourniquets, the TMT has been on the market for a few years and, while lesser known then the other two TQs in this series, it’s an excellent option if you’re looking for something different.

Many might look at the TMT and think that it’s a knockoff of the CAT, but in reality, it has a few differences that may persuade you

The securing method of the TMT will look familiar if you are used to using the CAT. The TMT boasts extra robust hook and loop for securing the TQ during application.

Those who like the quick disconnect of the SOF-T will like the style of disconnect used by the TMT. If you don’t like that the disconnect isn’t made of metal, the SOF-T no longer does that either with the latest generation of buckle being made out of polymer.

Again, since the method of securing relies on the hook and loop similar to the CAT, the application will feel similar. Those who are used to the CAT will have a lot of overlap with the TMT.

The band of the TMT is 2 inches wide, making it the widest windlass TQ on this list. Those who are students of the medical arts will know that the wider the TQ band, the easier it is to occlude major bleeding arteries. This band is .5 inches wider than either the SOF-T or CAT. This wider band also makes the TQ more comfortable for the casualty, since the pressure is spread out over a larger surface area.

If you are in the category of persons who do not like hook and loop, you won’t like the TMT. As with the CAT, there are some who have stated they won’t use a hook and loop TQ because it could become clogged with sand, and/or mud and fail to adhere properly. If this is you, the TMT might not be the right choice, though I have not heard of this occurring in some time and I have never had a problem myself in all the times I’ve applied the CAT.

You may not want to purchase a new style of TQ when you are already familiar and comfortable with what you have. Al though, there is very little that needs to happen for someone to learn how to use the TMT. But there’s nothing wrang with sticking to what you know when your life is on the line.

The windlass of the TMT is plastic, which is one of the reasons fans of the SOF-T prefer that style of TQ. If the plastic windlass is an issue for you, your only other option is the SOF-T, but still a good one in my opinion. Although, to be recommended by the Co-TCCC, it must undergo a series of tests in order to pass muster.

The TMT is a great TQ that has been well thought out to include the strengths of both the SOF-T and the CAT. Having the stamp of approval from the Co-TVCCC is important since they do all the testing needed to give it credibility. The wider band makes it a great option for casualty comfort and helps to improve the overall effectiveness.

We've already looked at the CAT by North American Rescue, and the SOF-T, by Tac Med Solutions.