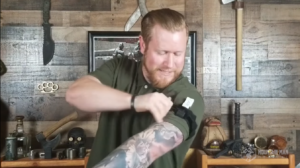 Bleeding control is the most important skill to learn in emergency trauma. Having a good understanding how to keep someone from bleeding isn’t hard and can be learned quickly and easily.

If you are wanting to get trained up, check out our YouTube Channel and our Emergency Trauma Response Course for techniques, tips, and tricks for keeping someone alive.

A question I get often is how long a tourniquet (TQ) can be applied before you remove it. This is often asked because of another prevalent rumor that application of a TQ will always mean amputation of the effected limb.

“How long before I can remove the TQ?” is something that students bring up from time to time, which gives me an opportunity to explain what steps to take and what problems to look out for after tourniquet application is complete and you’re waiting for help to arrive.

After you’ve properly applied the tourniquet to control bleeding there’s a good chance your casualty will begin complaining that the TQ is “too tight.”

Often, if awake and conscious, badly wounded casualties will beg you to release the TQ because of how painful a correctly applied TQ is. It’s not uncommon for the casualty to complain more about the TQ on their arm or leg then the wound that required the tourniquet in the first place.

A first responder without any experience may lack confidence in their skills and can quickly become worried the TQ wasn’t applied right, which is the cause of the pain.

This may help the casualty in persuading the first responder into loosening the TQ to make it more comfortable.

Loosening, or removing a TQ is never something you should do. Once the TQ has been put into place, it must remain there until the casualty has had a chance to be seen by a doctor.

One of the immediate problems with removing a TQ keeping a person from bleeding to death, is that now the bleeding isn’t being controlled and the casualty may bleed to death if the TQ is removed.

Loosening the TQ is also not recommended because the casualty may just bleed to death more slowly. Depending on the amount of blood they’ve already lost, they may not have much to spare, and every drop of oxygen rich blood is vital to survival.

Releasing a TQ is like turning on a hose. If there is a clot forming inside the bleeding artery, it plugs up the end and continues to help with bleeding control.

Turning on the hose, or releasing a TQ, creates a flood of blood suddenly rushing down the artery and a risk of blowing out that important clot we worked so hard to get there to help us control bleeding.

An additional problem that you may have been unaware of:

Toxins begin to immediately build up in a limb that has been tourniqueted. The blood in your body does many different things, such as carry oxygen and nutrients to the body tissues, and regulating temperature, but it’s also responsible for removing all the different waste products and toxins that are released in the body.

Without continued blood flow removing these toxins, they begin to build up in the limb, and when the TQ is released, all the stored-up toxins will flood back into the body and create serious problems for the casualty if done without a doctor there to anticipate this issue.