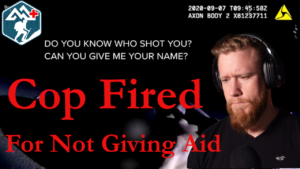 A Denver Police Officer has been fired for failing to render aid to a mortally wounded gunshot victim.

On Sept. 7, 2020, Denver Police officer Dewayne Rodgers and his back up officer, David Clough responded to a report of shots fired in the vicinity of an apartment complex located at 10150 E. Harvard Ave.

Upon arriving at the scene of the shooting, the officers discovered 18-year-old Jalonte Jones lying in the parking lot of the apartment complex, suffering from gunshot wounds to his lower body.

Footage from Rodgers body cam shows him standing over Jones, and repeatedly asking his name and who shot him, but does not show him attempting to give aid to the wounded youth at any point.

“In his report from the night of the incident, Rodgers wrote that the victim’s pants were so bloody that he couldn’t tell which leg was injured. Rodgers later told investigators that he completed first aid and tourniquet training classes and generally carried a tourniquet on duty, but that he’d forgotten it that night.”

According to a report by investigators, Rodgers stated:

Officer Rodgers was fired on November 22, 2020, per the recommendation of Dever Police Chief Paul Pazen, and affirmed by Mary Dulacki, the Denver Department of Public Safety’s chief deputy executive director, who said:

“Officer Rodgers’ claim that he was concerned about aggravating the injury cannot excuse the lack of care he demonstrated since the foreseeable outcome of failing to render aid was death, which significantly outweighs any concern of aggravating an injury.”

Rendering aid in a hostile environment, with an active threat like that of a shooter still on the loose, is a dangerous task. Taking care of a victim on the streets of a large city like Denver is much different than taking care of patients in a well-it and staffed Emergency Room.

What are some of the problems and solutions of the above scenario?

However, you don’t need a Tourniquet to save a life. If Officer Rodgers had cut away the Jones pants, located the worst bleeding wound, and applied direct pressure over it, there is a chance he could have saved the life of the teenager.

Moral of the story: If you don’t have a TQ, direct pressure over the worst bleeding wound could save a life.