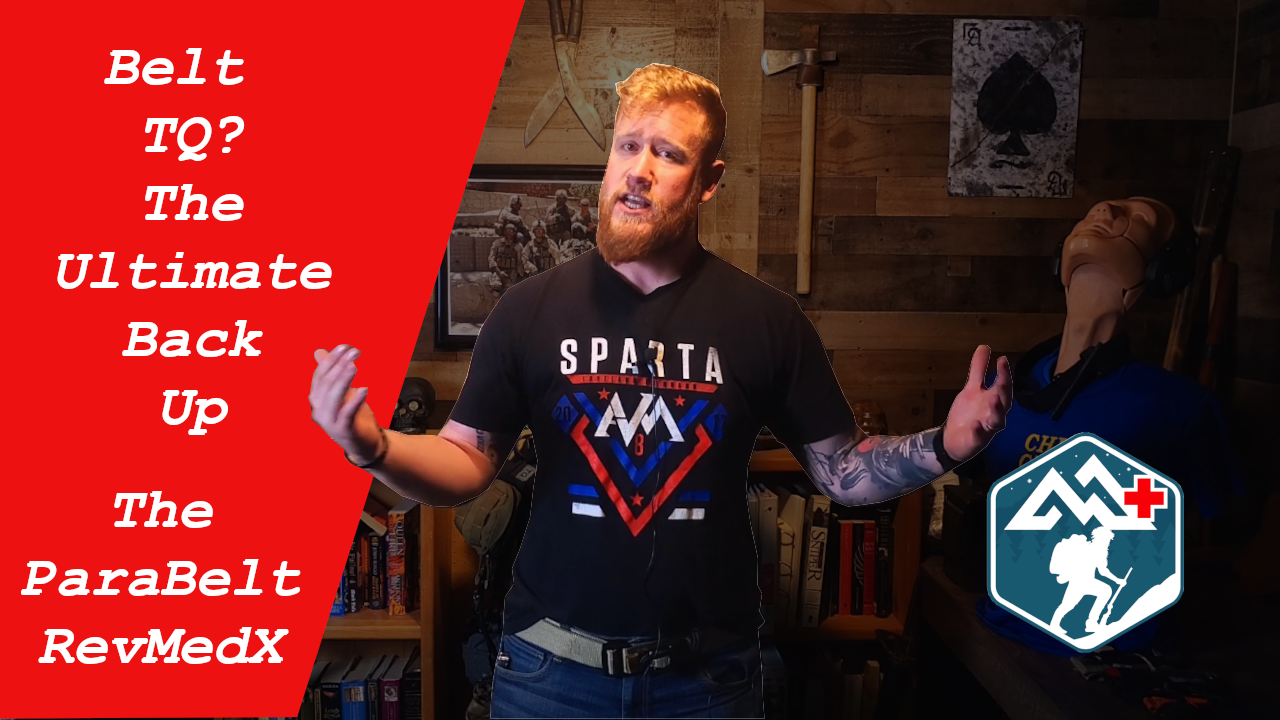 There’s a commonly thrown around myth that belts can make for a good, improvised tourniquet in the middle of an emergency if it’s all you have.

I understand that this seems like it would work, but close examination of how tourniquets work, human anatomy, and the construction of belts, shows that this isn’t the case.

Almost all belts make for crappy tourniquets, and if you want to know all the reasons why, check out my YouTube video talking about just that.

However, now I’m forced to eat my words after discovering a belt designed to serve this function well.

A few weeks ago, I published an article discussing the pros and cons of the TX2 Tourniquet by RevMedX. If you haven’t read it, I suggest checking that out, so you’ll better understand what I’m talking about here.

After requesting the TX2, I noticed RevMedX had an interesting piece of gear on their website. A belt that also doubles as a tourniquet.

This is nothing new. Companies have been attempting to create such a product for quite some time. But nothing I’ve seen, so far, does as good a job as the Parabelt that RevMedX produces.

The Parabelt is designed with their innovative ratcheting system that’s used to tighten down the TQ enough to fully occlude a heavily bleeding artery. This ratcheting system is uniquely qualified to make this work, since most TQs utilize a windlass making most designs awkward to use and, wear.

The Parabelt is well constructed to solve these problems and does it better than anyone else.

The belt itself is made of nylon webbing and flexible enough to wrap around a limb. Being flexible means that it won’t make for a very good gunbelt, but that flexibility is key for getting it around a bleeding limb.

The colors are standard tactical black or desert tan, so if you are looking to be the “gray man,” and avoid looking tactical, then this probably won’t do you any favors.

Sizing was perfect after following the directions laid out on the RevMedX website, and I was sent the perfect belt for me.

One of the problems with using a belt as a TQ means that if you do use it to stop bleeding, now you won’t have anything to hold up your pants which might be carrying lots of essential gear and personal items.

Belts are an important piece of kit for keeping your equipment on you and if you need to take it off to save a life, now you’re be stuck holding your pants up with one or both hands.

This might not be a big deal, but if you’re in an emergency situation, you might need to run for it. And not having a belt makes this more of a chore.

My overall opinion of the belt is good. I’ve never used it in a real-life scenario, but everything that I see in the Parabelt makes it appear to be a solid, and well-thought-out last-ditch tourniquet.

Mountain Man medical doesn’t currently stock the Parabelt in our online store, so if this is something you’re interested in, you’ll have to go over to the RevMedX site and pick on up there. Cost of the Para Belt is $125.00.

If you would rather purchase a CAT, or SOF-T Wide tourniquet, we sell them on the Mountain Man Medical store.