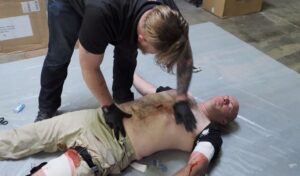 Shock is a term that can be very broad in its description but can also be broken down into more precise definitions. Many people mistake the term “shock” to mean that dazed and confused state some victims go into after experiencing something emotionally traumatizing.

Emotional shock is still a concern for a medic but is not usually considered life-threatening in an emergency. For our study today, we’ll focus on medical forms of shock and hopefully approach it in a way that’s easy to understand.

Broadly speaking, shock is a term used to describe a condition of the human body because of a lack of oxygen. This lack of oxygen can originate from many different sources and problems.

When you breathe in, oxygen is carried from your lungs to your blood and is pumped around your body to deliver that O2 to your tissues, organs, and brain. Any interruption in the many systems that support this function will cause a reaction in the body, often referred to as shock.

The body attempts to protect from further harm, hoping that a last-ditch effort will keep the victim alive long enough for something drastic to occur for survival. Like you, running up to save the day.

Why is Shock Dangerous?

Shock is a sign that something dangerous is occurring and we must fix that problem or the casualty could die.

With shock there is a decrease in the body’s temperature which reduces the blood’s ability to clot, and increasing the risk of bleeding. As the body cools, so too does it’s ability to bounce back and recover after such a traumatic event.

When you are severely injured and your body is not getting enough O2, it tries to compensate for the lack. It can do this in few ways:

Other signs of Shock include:

Don’t forget that comfort is an important element to medical care. Your reassurance can go a long way, even if there is nothing else you can do. 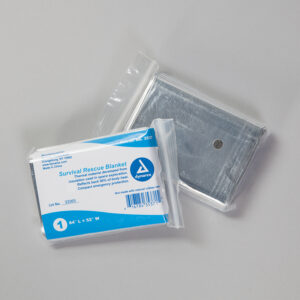 Survival Blanket for the prevention of hypothermia

Problems with the hearts ability to pump blood around the body to perfuse the tissue. A heart attack causes the pump (heart) to stop working correctly and blood is not transported efficiently, or at all.

Head and spinal cord damage resulting in a decreased ability to transport O2. A high spinal cord injury could sever the nerves which tell the lungs to breathe and the heart to beat, resulting in neurogenic shock and death.

An obstruction, like a tension pneumothorax caused by a sucking chest wound puts pressure on the heart, preventing (or obstructing) it from pumping O2 rich blood around the body.

An allergic (or anaphylactic) response is the body’s overreaction to a foreign substance. The body responds by dilating blood vessels causing a dangerous decrease in blood pressure. It helps to imagine a garden hose with a high-pressure stream, turned suddenly into a fire hose with same amount of water. What began as a fast stream, is now a slow trickle.

The increased diameter of the vessels causes blood pressure to drop, limiting the amount of O2 delivered by the blood. The treatment of epinephrine causes the constriction of blood vessels, increasing blood pressure and countering the anaphylaxis.

When an infection gets into the blood stream, it can cause a full body infection referred to as sepsis. The pathogens in the blood cause damage to the blood vessels, which become “leaky” and inhibits the transportation of O2 to the tissues. A victim suffering this kind of shock will present warm, due to the infection, instead of the normal presentation seen in shock of being cold and clammy.

This is the most common cause of shock in an emergency and the most easily prevented if given the right tools and skills. When a person has bled so much that they no longer have enough blood in their body to be pumped around the body and adequately oxygenate the vital organs, they will go into hypovolemic shock.