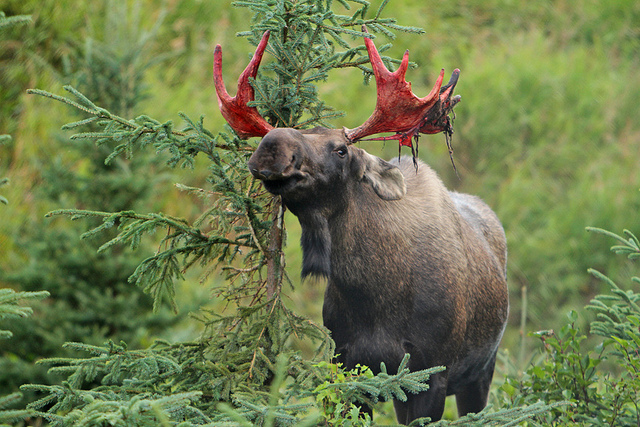 Shortly after high school, I took my wife’s family out for a short summer camping trip to one of Colorado’s national forests.

It was just me, an overconfident 19-year-old, my future wife and her younger siblings spending a few nights under the stars. I showed them what I knew about building fires and throwing knives, but after a while we got bored and decided to head out for a hike.

While we strolled along in the back, her siblings ran on ahead and I lost sight of them for a short time.

Soon, her brother Luke came running back all excited.

“There’s a moose in the meadow up ahead!”

“Awesome!” I said, not too concerned. Spotting moose in the back country of Colorado is a rare treat so I was happy to hear about one nearby.

“Did Laban see it?” I asked about the other brother.

“Oh yeah!” Luke said grinning. “He’s trying to see how close he can get to it.”

“What?!” I asked, the blood draining from my face.

Luke chuckled, not getting my concern. “The moose is just standing there looking at him!”

I dropped my wife’s hand and started sprinting up the trail. When I rounded the bend, I could see the meadow. Standing in the middle of some marsh, a cow moose was chewing a bright green water plant and watching with interest as the 14-year-old steadily approached.

Growing up hunting bear and elk in the back woods of the Rocky Mountains got me in a habit always carrying a pistol in case of bears, or whatever else I might need it for.

Strapped to my hip in some janky “Uncle Mikes” holster was my trusty Ruger P89 9mm, a present from dad for my 15th birthday.

But 9mm against a charging animal weighing over 1000 lbs. didn’t seem like enough fire power to do the trick.

“LABAN!” I screamed in my loudest whisper. I didn’t want to set off the moose.

Laban looked over his shoulder and beamed at me.

“Brian! Look how close I’m getting!”

He was indeed getting close, maybe 25 yards away at this point. The moose still watched him, more intently now, shifting from broadside to standing straight on towards the advancing boy.

“Get OVER here!” I said, reaching for the grip of my pistol.

“One sec, I’m gonna see how close I can get first.”

“No,” I said. “That moose is going to stomp your head into a red paste.”

I was finally able to convince him to return to the trail while the moose finished her lunch and disappeared into the trees. Then, I gathered everyone around for a few minutes and gave my first ever, Moose Safety Brief.

My brother-in-law’s lack of concern when it comes to moose is normal. Not everyone knows they have more to fear from a moose attack then they do from bear attacks.

Moose can weigh over 1,000 lbs., run 35 mph, and be meaner than your menopausing mother-in-law. Cows are especially protective of their calves, and bulls aggression ramps up during the rut, so there are few parts of the year when moose aren’t in an especially bad mood about something.

But not a lot of people know that. Moose don’t look especially intimidating despite of their size. They look kind of lumbering and slow, and often people walk up to them not understanding how unpredictable they can be.

Here are some important things to do around a moose:

Don’t try to see how close you can get. Don’t pose nearby for a selfie. Watching from a distance is the best way to observe this largest species of deer. If you see a calf, know there’s a mother nearby who won’t be pleased you’re around.

Moose hate dogs. Wolves love killing calves so they aren’t on the best of terms with canines already, and any Good Boy worth his salt will be barking away enthusiastically. Moose annoy easily.

When a dog sees an irritated moose turn their way, they’re going to do the only sensible thing, run. Often, right back to their owner, bringing with them a half-ton of pissed-off fur thundering along behind.

But this is counter to the advice for bears. With bears you don’t want to trigger the chase instinct, so standing your ground is the best choice.

That’s not what you want to do for moose though, because they don’t give a crap about you standing your ground. Try to get an obstacle in between you and the moose to make it harder to catch you.

If a moose does catch you, they will often stomp on you with their big hooves. Your best option if this happens is to roll into a tucked fetal position and protect your head and vital organs.

The moose will hopefully beat on you for a while, then decide you’ve learned your lesson about where you fall in the forest hierarchy and leave you alone.

Although many people are attacked by moose in North America every year, they aren’t usually killed. So, if you wait it out you should survive…

I think I’ve already established credible evidence that moose are jerks. But if you still aren’t convinced, here’s more.

Feeding moose might seem like a fun experience. I get it. However, when you feed a moose, that moose will eventually come to associate people with food. When that happens, moose become very entitled and will approach random people expecting a treat. If that person doesn’t have the treat, the moose becomes annoyed.

If you failed to follow all of this advice, or happen to witness someone who didn't bother with this article, here’s some gear I think might help you out:

You aren’t likely to be gored, moose attack by stomping on you, so fractures are likely. Bones can be ragged sharp and slice through internal arteries and you may need to control bleeding with a tourniquet or two.

Since you’re probably in the woods, splinting material in the form of a couple of sticks is easy to come by. Life vastly improves, however, if you already have a splint in your trauma kit.

Two compact options are the RISE Splint from TacMed, and the Mountain Man Medical Moldable Splint.

These are great for keeping bandages in place, securing splints, and for wrapping strains and sprains.

Or as medics know them, cravats, are another multi use item. These are one of my favorites for making a sling and swath for arm fractures but can also be used to tie on more splints, filter water, or whatever else you can think to use them for.

A good pair of trauma shears is important for exposing the wounds, and for cutting more bandages or strips of cloth for tying on splints.

There’s likely to be quite a few scrapes, cuts, and bruises so a handy supply of minor wound care items like adhesive bandages will be necessary.

This is a favorite item of mine because it can be a literal lifesaver in the backcountry. It’s inexpensive, and packs great because of its small size and weight.

If the victim has been hurt badly enough to go into shock, it’s essential to keep them from becoming hypothermic. You may also be stuck in one place for a while until help can get in to rescue you and your casualty, so being prepared to defend against the elements is key.

Moose attacks and other emergency can happen at night too. Having a way to see what you’re doing improves your quality of life substantially and a head lamp frees your hands up for work. I always pack spare batteries for my electronics, and you should too.

I’ll leave this up to you to decide on but I like to keep things like a signal mirror, fire kit, water purification, cordage and of course a sturdy, razor sharp knife.