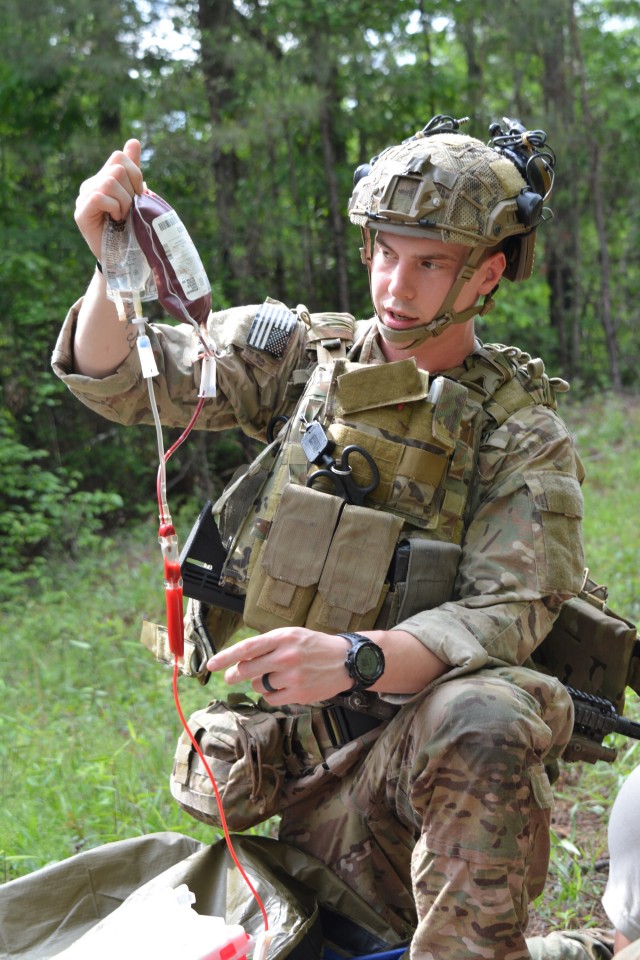 History was made by Staff Sergeant Charles Bowen and Sergeant Ty Able one long night in Afghanistan when they utilized a brand-new procedure developed by the Army to keep our nations warriors in the fight.

The Ranger O Low Titer (or ROLO as the troops know it), uses a live donor to supply combat medics with a fresh supply of blood on the battlefield.

Bowen and Able were conducting operations with their unit, Bravo Company, 1st Battalion, 75th Ranger Regiment, in the Wardak province of Afghanistan in the summer of 2019.

Work for the medics began after the Rangers were attempting to dislodge a barricaded shooter. Three soldiers were injured by an explosion and the two units of blood every Ranger medic carries was quickly used up treating the casualties.

After the care under fire phase was completed, the medics moved back out of the fight and into a more secure location to perform a more thorough inspection of their casualties when another wounded Ranger staggered into their position with a large, heavily bleeding wound to his neck.

“As he fell into me with his multipurpose canine still attached to his belt, I told him to put pressure on the wound. He replied, ‘I'm trying!'” Bowen said.

According to the Armed Services Blood Program:

“With blood pouring from the casualty’s neck wound, Bowen placed his middle finger into the hole to stop the bleeding. Lying in the dirt, under enemy fire directly hitting their position of cover and concealment, Bowen and Able performed an advanced surgical technique known as a cricothyroidotomy to allow the wounded Ranger to breathe; a cricothyroidotomy is an incision through the skin and cricothyroid membrane to establish a patent airway.”

After patching up the casualty and ensuring a clear airway, the medics quickly conferred about the amount of blood lost by another casualty who had bled extensively from chest and extremity wounds.

Together Bowen and Able decided the casualty would not survive to reach the evacuation point unless he received blood to replace what had been lost. But they’d already used up the blood they carried with them in coolers for the mission.

It was time to implement ROLO.

While Bowen and Able saw to their wounded comrades, enemy fighters attacked, and the Rangers were once again engaged in a firefight. In the middle of the fighting, the medics covered their casualties with their own bodies to shield them from the incoming fire pouring in.

“To provide this level of care, Bowen and Able … had to ignore their own survival instincts and concentrate on their patients. They displayed the highest levels of courage as they repeatedly placed their patients' survival above their own safety,” Lieutenant Colonel Ryan Knight, the 75th Ranger Regiment Command Surgeon, said.

Despite being in the middle of a firefight, the medics used ROLO to save lives.

The Ranger O Low Titer Whole Blood Program protocol is used to first identify Rangers who have the blood type O, which is known as a universal blood type usable across all other blood types.

Those Rangers identified with Type O blood are required to become battlefield donors able to supply a fresh source at the point of injury.

According to the Armed Services Blood Program:

“When called upon, the donor’s blood is drawn by the unit's combat medic or trained non-medic Ranger. The volunteer then returns to combat and the blood is immediately administered to the casualty. The whole process takes about 10 minutes.”

The lives of 2 highly trained warriors were saved by the impressively competent Ssgt. Bowen and Sgt. Able using this innovative new protocol

For those who may not understand the level of difficulty of performing such an advanced procedure, in combat, it’s similar to winning the gold in the Olympics of war medicine.