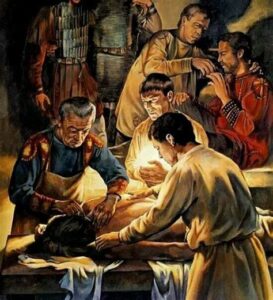 If I’m honest with myself, I never joined the military to be in the medical field. It was just something I picked up, almost by accident. I wanted to be a shooter more than anything else. Gunfighting seemed like an acceptable adventure to me, so that’s what I was after.

Although my father had been a career fire fighter and EMT, the thought never occurred to be a medic. Sometimes, the things that are chosen for us, end up being better than what we might choose for ourselves.

Being a medic has become a big part of the way I see myself. I like being the guy who is calm and cool when there’s blood and gore. I like providing comfort to people who are desperately in need of kindness. 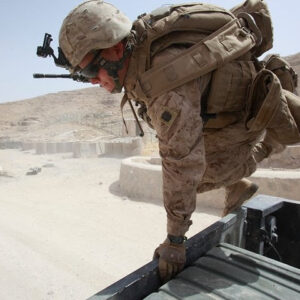 As a young Doc, I loved the adventure that came with the job.

So, over the years, integrating being a medic into my identity has been beneficial to me in so many ways. I’m proud of my role, and that pride has encouraged me to research the first of our kind. The first combat medics to ever wander the battlefield. A box full of bandages on one hip for healing, and a sword strapped to the left, for damage.

In this and the following articles about this topic, I will show you what I’ve learned. I find it fascinating and I think you will too.

Who Were the First?

There’s always been violent conflict between humans. And for many millions of years, nothing could be done to reverse the damage. But suddenly, in our tiny little portion of time where we live, we have not only the knowledge of how to save a life, we have the tools to do it.

Trauma medicine is something that’s been practiced by humans for a long time with little success. But who were the first, organized, professional caregivers on the battlefield? 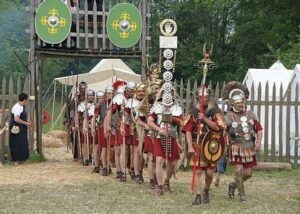 Stepping Outside the Wire On Patrol

All experts I’ve come across agree it was the Roman Empire which produced the first legitimate combat medics. The civilization of Rome was unequaled at the time and for many hundreds of years afterwards. Covering millions of miles of territory, the power and reach enjoyed by the nation meant it must be highly organized and advanced.

Rome had sophisticated sewage systems and aqua ducts for the transportation of fresh water to a thirsty city. A robust law system, the basis of which is still used in courts today. And of course, a healthy interest in the development of medicine.

Rome was constantly growing and with that growth comes the conflicts of taking land, and then defending it from being retaken. This meant a well-equipped and well-trained professional army that could out fight the enemy on his home ground.

New recruits were (usually) volunteers who signed 25-year contracts in service to Rome. Young men were given rigorous testing and medical assessments to ensure they were fit for duty and ready for the accelerated training pipeline. 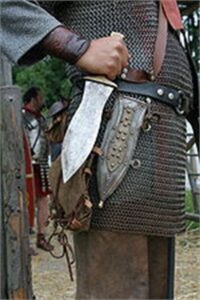 After completing a 4-month basic training they were put with their unit and instructed on fighting as a tightly controlled team. Life on the frontiers of Rome was brutal, made even more so by the strict command structure and discipline.

The most harshly punished crime, cowardice, creatively dealt with.

If a soldier turned and ran from the battle in fear and was convicted of cowardice, every 10th soldier from his unit was executed along with him. Those who survived the culling were further punished with a period of rations subsisting of only barley and water.

The substantial organization and discipline of the Roman army ensured the same in its camps and fortresses. Each was laid out under specific protocols that allowed for field sanitation, a concept unpracticed by any force at the time, and for hundreds of years after. 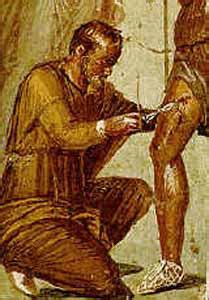 A roman surgeon tends to a solider suffering from a leg wound.

Water sources were protected from contamination, and latrines were dug in places to reduce the occurrence and spread of disease. Medical tents were erected as close to the fighting as possible so surgeons, with ready scalpels and anesthetics, might save the life of a wounded soldier.

Understanding that the wounded must be treated quickly, the Romans developed the first ambulances, and organized groups of litter bearers to whisk them away to the medical tents.

Bringing the wounded to the waiting doctors, were medical corpsman. Regular infantry troops were picked and tasked with carrying a box of bandages and seeing to the wounds of his comrades.

Medical providers tasked with the care of injured soldiers helped reduce infection by bathing every morning before work, and soldiers pulling hospital patrol duties would thoroughly clean each hospital every night in preparation for the next day’s battle. 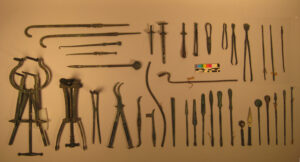 Injured warriors were cared for in different locations than those suffering from an illness to help prevent the spread of disease. They were stabilized then sent to camps away from the combat where they were allowed to recover from their wounds, and fed a special diet of foods they hoped would promote healing and decrease recovery time.

In the next post on this topic, we will examine the tools of the trade of Roman surgeons and their line medics, including the types of herbs and methods for treating wounds in a time before the wonders of modern medicine.

If you’re looking to prepare for a life-threatening emergency, Mountain Man Medical sells the best trauma kits on the market at the lowest price.

THE EVOLUTION OF TRAUMA MEDICINE IN WARTIME

The Contribution of Roman Law to Modern Legal Systems

The Contribution of Roman Law to Modern Legal Systems