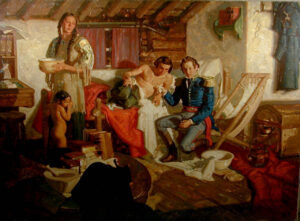 Modern Medicine is a marvel of science and human ingenuity. Enormous advancements have been made in the last 200 years that have substantially improved our quality of life.

It can perhaps be difficult to know what life was like before the massive convenience medicine now affords us. We think little of how things like birth control, hygiene, and trauma medicine have a constant positive effect on society.

For all of time until very recently, life was a constant brutality, and no place more brutal than the North American Frontier of the 1700-1900s. This period was when the mountain men roamed the rivers and streams searching for their fortunes in the forms of beaver pelts.

Below is a story about one of these hard men who sustained a grievous wound, and the doctor who exploited him to become the Father of Gastric Physiology. 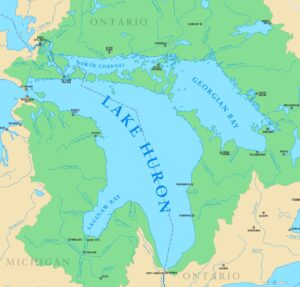 18-year-old Alexis Bidagan dit St. Martin was working as a cargo transporter for the American Fur Company, in the area of Mackinac Island of Lake Huron. While stopping off for supplies at the company store at the US Army’s Fort, Alexis was accidently shot at near point-blank range with a shotgun.

The weapon, loaded for ducks with bird shot, was discharged into the young man’s chest and abdomen. Eyewitnesses reported the muzzle of the shotgun was between 2 and 3 feet away from Alexis when it fired, driving the wadding into the wound and catching his shirt on fire.

Army Surgeon Dr. William Beaumont, who happened to be at the trading post this day, pushed his way through the crowd surrounding the badly wounded man. He cleaned and dressed the gun shot immediately, but wasn’t optimistic about the survivability of the wound, saying he didn’t think the man would live longer than a day and a half at the most. 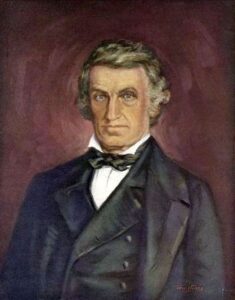 “The wound was received just under the left breast, and supposed, at the time, to have been mortal. A large portion of the side was blown off, the ribs fractured, and openings made into the cavities of the chest and abdomen, through which protruded portions of the lungs and stomach, much lacerated and burnt, exhibiting altogether an appalling and hopeless case. The diaphragm was lacerated, and a perforation made directly into the cavity of the stomach, through which breakfast food was escaping.”

However, much to everyone’s surprise, Alexis was still living when Dr. Beaumont checked back in the next day. Every day was a surprise as the youth continued to survive the grave wounds.

But as each day passed, the need for food increased. Whenever he ate, food fell out of the hole in his stomach, so nourishing enemas were given to sustain him for 17 days until the victims digestive system began working again and he was able to keep food down.

Soon, the tissue of the stomach adhered to the edges of the wound, keeping an open window (approximately 2.5 inches in diameter) into the digestive system.

The Yellowstone Trauma Kit is perfect for bleeding control in the Rocky Mountains.

Dr. Beaumont was pleased to discover that this did not seem to bother Alexis at all with no noted pain, nausea, or vomiting. He needed to be careful to cover up the hole in his guts whenever he wanted to eat or drink, but beyond that, life was possible.

And now, the doctor could observe human digestion in real time, something that had never been done before. And don’t forget this is in a time when very little was known about human anatomy and when ideas like Bloodletting, and “good and bad humors,” was still considered acceptable medical procedures.

Seeing an opportunity to advance his standing in the medical community, Dr. Beaumont elected not to close up the wound, but instead decided to leave it open in order to study Alexis and his unique condition.

This failure to close up the wound was later used to call into question his medical ethics. Current medical philosophy also takes into consideration the psychological effects of such wounds. And Alexis was subjected to many indignities at the hands of Dr. Beaumont for the purposes of his experiments, but also the ridicule of his community.

His brother reportedly stabbed a man, severely wounding him and threatening to kill anyone else at the fort if they did not leave his brother alone.

The Psychological effects of the ugly wound in his chest was clear as Beaumont mentioned the Canadian was growing increasingly frustrated with all the poking, prodding and experiments at his expense.

The Yellowstone Trauma Kit is perfect for bleeding control in the Rocky Mountains.

Dr. Beaumont progressed with his experiments, disregarding Alexis’s discomfort. Since the wounded man could no longer travel the water ways transporting goods for his employment, he was quickly fired from his position working for the American Fur Company.

Seeing an opportunity to maintain control of his experiments, Dr. Beaumont hired Alexis as a personal servant, giving him duties around the home to maintain and dreaming up new experiments to attempt.

The doctor was limited in his abilities and equipment to carry out any complicated theories but was still able to determine how food was digested in the human body.

By tying food to silk threads, the doctor lowered it down through the hole in his patient and then pulling it back out to inspect. Sometimes going so far as to taste the partially digested foods. Noting at one time that digested chicken tasted bland and slightly sweet.

He also stuck his tongue down into the open wound, tasting the stomach acid, and was the first person to understand that milk curdles in the stomach before being digested.

While his methods for obtaining the information is looked down on by today’s modern medical ethics, and he frequently misused his patient to further his own career, Dr. Beaumont is considered the Father of Gastric Physiology and been called the “First Great Medical Scientist.” He went on to a lofty career lecturing and writing in length about his many studies and findings.

Alexis stayed with him for a time before tiring of the constant experiments and being in the employ of his caretaker. He abandoned the doctor and traveled back north to Canada where he married and started a family of 6 children but lived in complete poverty. 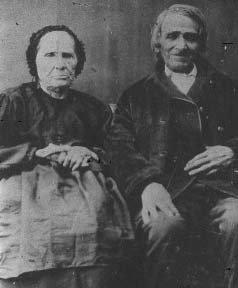 Alexis and his wife Marie in advanced age

Dr. Beaumont repeatedly attempted to bribe his patient back for more study, but when Alexis, destitute, requested his family come along with him, the doctor refused, referring to them as “livestock.” While he later admitted to regretting attempting to force Alexis to abandon his family, the two never saw each other again.

The mountain man outlived the doctor who saved his life by a few decades, when Beaumont slipped down an icy set of stairs in St. Louis and died a month later from a closed head wound in April 1853.

Alexis however lived until old age finally took him on June 24th, 1880. He'd been hounded all his life by Dr. Beaumont and other medical factions who wanted to study him, including one organization who wanted to preserve his stomach in formaldehyde so his contribution to science would never be forgotten.

But his family was just as tired of being pestered as Alexis had been and threatened to kill anyone who tried. They then took advantage of the hot summer to leave the corpse in the sun for a few days to allow it to rot beyond the point of any usefulness.

With an advanced state of decomposition underway, the family then took to burying the body under 8 feet of topsoil to further prevent any attempts at recovering it by grave robbers and exhumers.

This article was written with the assistance of these resources. Learn more about this amazing case here: