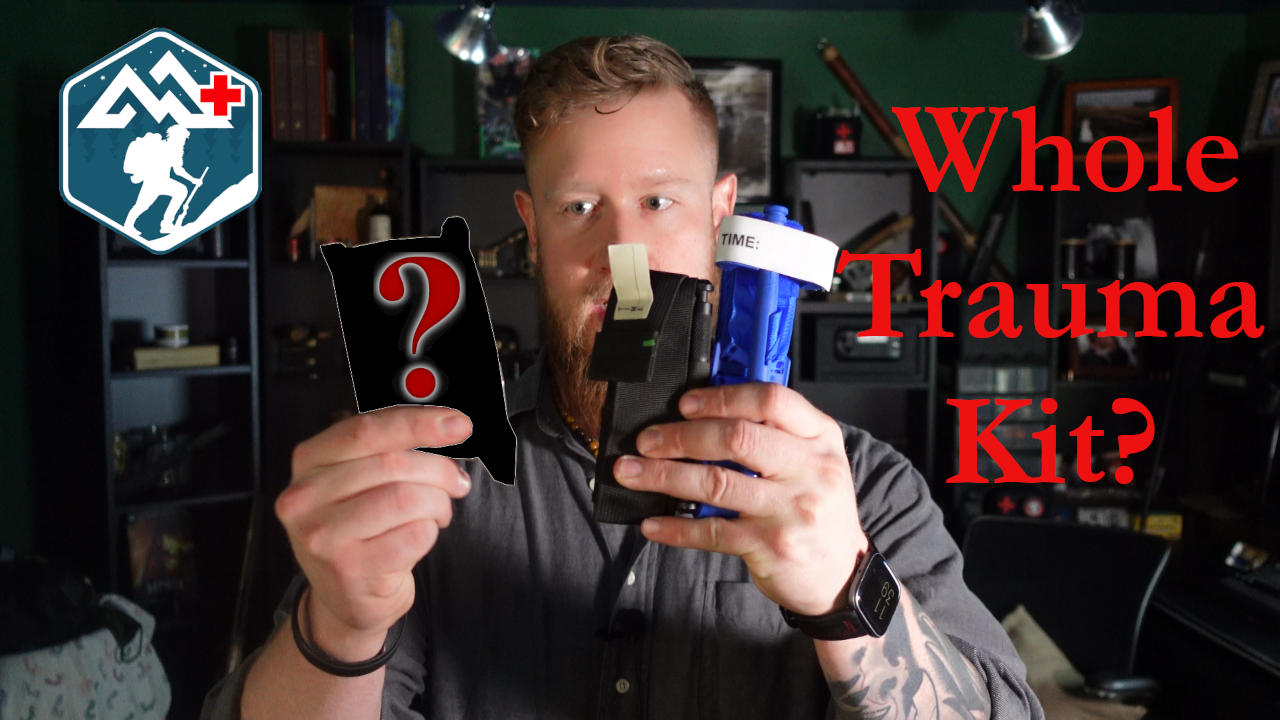 Working as a Corpsman and EMT, I wasn’t given the choice of what medical gear I used. People with much more experience, training and education decided ahead of time what was acceptable and what wasn’t.

As a result, I only used gear that was issued and available to me and I never thought about if there might be a better option because it wouldn’t matter if there was. It would go against SOPs (Standard Operating Procedures) and that was always strictly forbidden.

Now that I’m free to explore and look into other life saving equipment, I’m given the opportunity to search out the answers for myself and question my reasons for doing what I do.

War is the best place to study trauma because of how many casualties there are. Data is collected, tests and experiments are done, and medicine greatly benefits from all the opportunities to study how life-threatening wounds effect the human body, and how we can better prevent death.

My military training has given me a detailed look into why the military does what it does, and how significantly it differs from the civilian world. Most citizens are not confronted daily by the same obstacles the military must take into consideration.

This means, not everything the military does is a good idea for the civilian world.

The CoTCCC (Committee of Tactical Combat Casualty Care) is the government think tank made up of highly qualified medics and trauma doctors. Their goal is to discover the best ways for keeping our warriors alive after they’ve been seriously wounded in combat.

They make frequent recommendations on what types of gear is allowed and what isn’t, and since they’re the official word, most of the civilian world tends to follow suit, whether or not it’s actually the right choice for them.

I have a decent amount of real-world experience with the most popular TQs out there, the CAT and SOF-T Wide, and I have absolutely no problem with them as life-saving devices. I’ve personally seen them save lives and know they work. So, I’m not saying those TQs are worthless.

However, since civilians don’t carry a medic’s full battle rattle, there isn’t room always room to have bleeding control when you need it. Carrying a CAT or SOF-T on a daily basis is uncomfortable because of the awkward shape taking up what little space you have in your pockets or purse.

On top of this, there’s also the fact the most TQs are limited to only being able to treat wounds on the arms and legs. If you have a wound in your neck, arm pit or groin, you’re S.O.L.

It would be nice to have a tourniquet that’s able to handle more then one type of injury. If only something like that existed…

Carrying this one item is like carrying a complete trauma kit. While it has yet to make the list of approved TQs by the CoTCCC, it can do A LOT of things that other tourniquets can’t.

Here are some of the ways the SWAT-T can be used, besides extremity bleeding control:

The SWAT-T is the easiest to carry in a pocket or purse every day. It’s small, flat, and rectangle so it won’t take up much room. And since it’s made of pliable rubber, there’s no chance it’s going to dig into you when you sit down.

This also means that you can stock your trauma kit with more than one, while trying to pack multiple CATs and SOF-Ts can be a hassle to fit in around all the other stuff you might need, like chest seals and pressure dressings.

Ok, if it’s so great, why doesn’t the CoTCCC approve it for the military?

SWAT-T is an acronym that stands for “Stretch, Wrap, And Tuck – Tourniquet,” the rubber band is pulled tight, wrapped around the injured limb, then tucked under itself to keep it in place. This method of securing the TQ (by tucking it under itself) is perfectly acceptable in normal civilian circumstances. But combat operations are anything but normal and the casualty may need to be dragged, carried, hoisted over walls and fences and the tuck securing method isn’t as solid as the CAT or SOF-T Wide.

There’s a risk for any TQ to become dislodged accidently, which is why I always recommend frequent checks to ensure everything is still working properly. The risk is just a little higher with the SWAT-T. This is why the SWAT-T has been ruled out for combat, not because it doesn’t work.

And even though it’s not officially recommended by the Co-TCCC, I personally know members of elite tier 1 units who carry the SWAT-T on a regular basis. It’s especially popular with clandestine operators who are looking to carry as little equipment as possible to better blend in with the local population. They carry the SWAT-T for all the reasons I’ve laid out in this article.

It’s effective, the most versatile TQ on the market, and small enough to slip into a pocket. It’s like carrying a complete trauma kit in one handy, compact package. Don’t feel like you need to throw out those other TQs you have, they still have their place, but adding 1, or 2 (or 3) into your trauma kit means you won’t be taking up too much extra space and you have significant redundancy and the confidence to know that you can handle a very bad situation.

If you would like to know more about how to use and apply the SWAT-T, Mountain Man Medical has released a free online training course that will show you how to use the contents in your new trauma kit so you can be confident in the midst of a crisis.