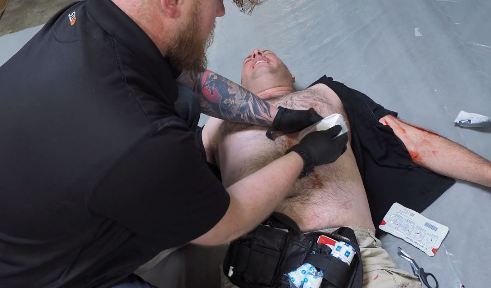 Trying to decide what the best tourniquet is for you? The Combat Application Tourniquet (CAT) is often viewed as the best device for controlling life-threatening bleeds and is trusted by medical professions all around the world. The SOF-T Wide is also just as trusted, but not quite so widely used. This doesn’t mean it’s inferior.

The CAT has the benefit of being the first to the market and was picked up by the US and British militaries for combat applications and so it enjoys great data supporting its effectiveness.

The SOF-T Wide came onto the scene a short time later, but since it was approved by the Committee on Tactical Combat Casualty Care (CoTCCC) after the CAT, it isn’t as widely recognized, but still deserves your consideration in my opinion.

I have used both TQ’s in real world applications and I have some opinions that might help you decide which is the right TQ for you.

Since the CAT has been around longer and is trusted by the US military, civilians have been quick to add it to their kit. Police departments and EMS personnel stock the CAT almost exclusively, and if you’re ever told to grab a medical kit, there’s a good chance the TQ in it will be a CAT.

If you know the right method for self-application, the CAT is very quick and easy to use, which is important when you’re bleeding to death and don’t have anyone nearby to help out.

As I’ve already said, the CAT has been around a long time and has saved a lot of lives. The military is always doing research to ensure the best techniques and gear are used to keep their warriors alive (contrary to popular belief). Those studies compile data from thousands of seriously wounded service members and the CAT clearly works.

The CAT is oddly shaped and doesn’t store as well as other TQ’s on the market. This doesn’t mean it’s impossible, but if you have a very limited storage space, like only a cargo pocket or carrying medical gear in an ankle rig, then the CAT won’t be as comfortable or discreet.

There are a few out there who consider the CAT to be unacceptable because they’ve heard from “credible” sources that the hook and loop can get clogged with sand and fail to secure. I’ve never once witnessed this or heard tell of it from other experienced combat medics in all my time using it, but I suppose there is a slight possibility of that occurring.

The same individuals who describe the hook and loop problem above, also contend that the plastic windlass of the CAT is prone to breaking, especially when in very cold environments. This is true to a degree, and I have heard tell of it occurring, but this is a rare problem if it even exists anymore.

All the stories I have heard surrounding this possibility are with the older models of the CAT. Since its original production, the CAT has been upgraded several times and the windlass is now much more robust and very unlikely to fail on you.

Personally, this is my favorite tourniquet. I still trust the CAT completely, and wouldn’t hesitate to use it, but I enjoy the SOF-T just a little more. Here’s why:

I like the SOF-T because I don’t have to deal with the hook and loop, which can be frustrating because it tends to stick to everything. With the loss of fine motor skills in an emergency, this can be aggravating, but certainly not impossible to deal with. And I've only had this situation happen on a few occasions.

This makes it easier to carry multiples, and also easier to carry on your body in a cargo pocket or ankle medical rig. Not everyone does this, but if you do, the SOF-T might be a better option for you.

While the SOF-T doesn’t have quite the same track record, it is still used by many elite units and to great effect. Just like the CAT, it has gone through several iterations to increase its effectiveness and is worthy of your confidence.

Those who do not trust the CAT often prefer the rugged metal windlass of the SOF-T. It’s easy and comfortable to use and locks into place without much difficulty.

The SOF-T, while great for treating casualties, it's slightly harder to apply one handed because you need to trap the TQ against your body to tighten it down initially. This is not much of a problem, provided you know the method and have practiced a few times, but know that this is a deal breaker for some.

Without rubber bands to keep the SOF-T together, there isn’t anything holding it snug in your pocket or medical bag. The CAT enjoys the hook and loop keeping things nice and neat, but the SOF-T doesn’t have any, and this could make the difference for you.

Either is a fine choice and will serve you well. I stock both in my personal trauma kits and interchange them as the situation dictates. But I am also well trained on how to use them and the right time to do so. If you don’t have the time, or inclination to learn a new TQ system, I recommend sticking with what you know.

If you would like to learn more about first aid and how to save a life, check out our free training course that will teach you this, FOR FREE.

USE COUPON CODE blackfriday2020 THROUGH MONDAY NOVEMBER 30TH TO SAVE 15% SITEWIDE! Dismiss