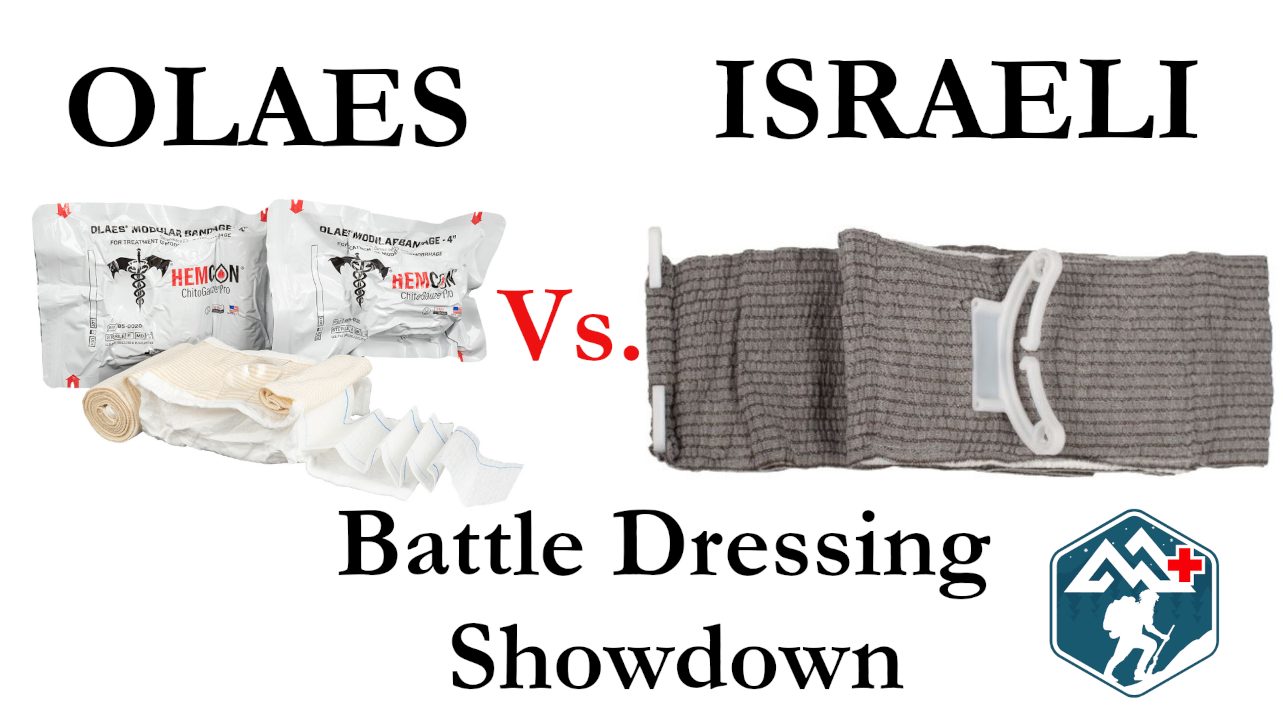 Seems like I’ve been on a bit of a pressure bandage kick. Which is fine with me cause I can only write about tourniquets for so long before my eyes start to bleed.

If you didn’t already know, a pressure bandage is a stretchy material wrapped around the victim to provide constant firm pressure to the wound and wound packing gauze for bleeding control.

This is important to know because not all life-threatening injuries occur on the arms and legs where TQs do their best and only work.

There are plenty of different pressure dressings on the market and they vary widely in size, function, and style, but the two that are leading the pack are the Israeli style and the OLAES Modular Pressure Dressing.

This is probably the most well-known pressure dressing out there since it was broadly adopted by the US military, and because it was the first battle dressing to use a method of additional pressure via the clip.

This clip effectively increases the pressure over the wound site, so the medic doesn’t need to hold the gauze in place and is free to get up and work on something, or someone, else.

While it does work to help control bleeding, using the clip isn’t intuitive. I often see people trying to use it for the first time, not knowing there’s a trick to making it work . If untrained, most people will pass the bandage through the clip and then keep wrapping around in the same direction as when they started.

To use the clip of the Israeli bandage correctly, you must first pass the bandage through the clip, then pull it back over the top so it pulls the clip down tight on top of the wound.

This is the newest addition to the family of pressure bandages and it’s definitely worth a look. The OLAES works the same way as the Israeli except instead of a clip applying pressure, a small plastic cup has been sewn into the fabric to add the needed pressure.

This is better than the clip in my opinion because using the cup doesn’t require specific training to make it work. You should always understand how to use your gear, but if you threw this bandage to someone who wasn’t trained, there’s a good chance they’d get it right.

The cup could also be cut out and used as an eye shield for ocular injuries.

Those of you in the know might remember the original OLAES was released with a substantial amount of wound packing gauze tucked into the pocket behind the absorbent pad. Along with it, came a sheet of plastic intended to be used as chest seal that’s kept in place by the bandage.

These two items have been removed in the new “ChitoGauze Pro” version and replaced with a length of one of the best hemostatic dressings you can buy. This gauze is impregnated with chitosan, an ingredient that cause blood at the wound site to coagulate more quickly and ensure a robust clot forms to seal off the end of the severed artery.

Having wound packing gauze in the same package as your pressure dressing is a great idea. If you need the one, there’s a good possibility you’ll need the other, so this is one of those ‘no brainers.’ It frees up space in your kit for you to get more items in, and reduces the time spent opening packages and rooting through your trauma bag.

Leaving out the chest seal material isn’t a great loss in my opinion because the packaging the bandage could easily fill this role.

So, which is better? My money’s on the OLAES. It’s intuitive, effective, well thought out, and you can’t beat the all-in-one with the inclusion of the ChitoGauze for wound packing.

If you are on a tight budget, the Israeli Style or regular version of the OLAES might be the best option for you.

You can pick up either the OLAES, the Israeli, or other styles of pressure dressings in the Mountain Man Medical store.

If you’d like to learn how to use the items in your trauma kit, click below to be taken to a free training program that will teach you the basics.