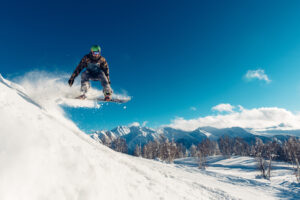 Snow is here and it’s time for that deep sweet powder at the top. Winter sports are starting to pick up and of course so will the number of injuries that happen from activities like skiing and snowboarding.

According to statista.com, 22.5 million people ski or snowboard in the US and 51 million tourists enter the country just to enjoy our mountains and snow.

Waxed boards and breakneck speeds through forests of stately pine trees is a recipe for disaster. But that’s part of the fun, right? If it was totally safe there wouldn’t be the thrill.

Danger and pain is just a part of being alive, but having a few tools and skills rattling around will help you make the most of a bad situation.

Here are some of the injuries that you should be thinking about so you can focus your attention on understanding the treatment in the event you, or someone out on the mountain with you is hurt.

The Tracker Trauma Kit. Perfect for the outdoors.

A 6-year study done by The Finnish Surgical Society in 2014 found, “The most common injuries affect the knee in skiers and the upper extremity, especially the wrist, in snowboarders.”

The study also mentions that out of the nearly 3,000 injuries studied, “The knee injuries of the skiers constituted almost one-third of all cases, whereas snowboarders sustained more injuries to the upper limb and axial areas.”

Interestingly, the study goes on to say that men have a lower rate of injury when snowboarding.

“Injured snowboarders were significantly younger, less experienced, and more likely to be female than injured skiers or snowboard control participants.”

Sports are fun because there is an inherent risk you must deal with to be successful. But if you do a dangerous thing long enough, you will eventually get hurt. Knowing what injuries you are most likely to sustain can help you to prepare for when you do.

If you would like to know more about trauma medicine, Mountain Man Medical offers a free online course that will show you the basics of trauma medicine.