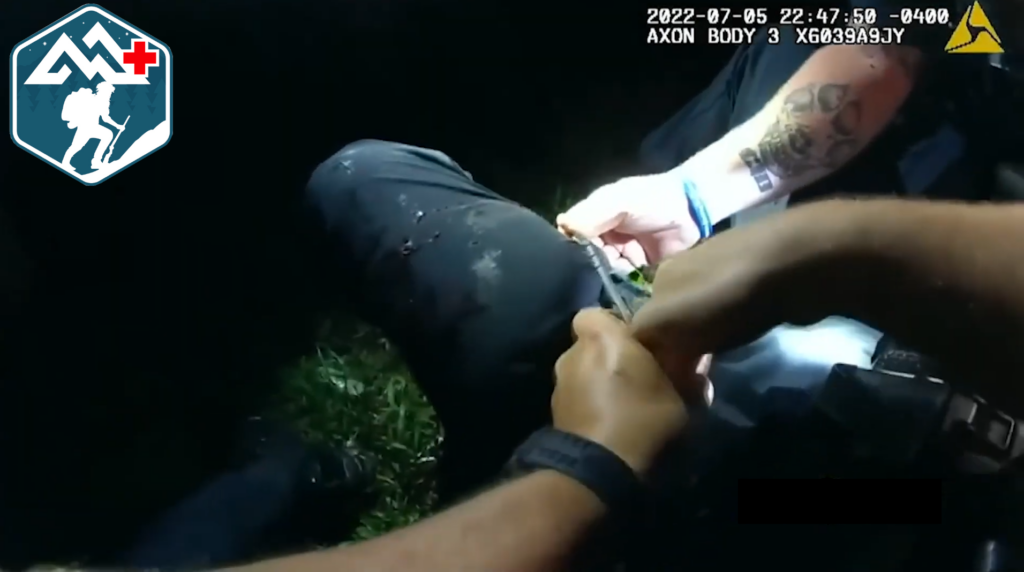 On July 5th, 2022 at around 11 pm, Knox County Tennessee deputies where responding to a call in the 800 block of Brickyard and Powell Road.

Arriving on scene was deputy Lydia Driver and her patrol partner, Jordan Hurst.

During the course of the investigation with the residents of the home, deputies became aware of a large aggressive pitbull on the property.

Realizing the potential threat of a large dog with the reputation of pitbulls, the deputies attempted to make the scene safer to conduct their business by asking the dog’s owners to put the dog in the kennel.

The owners agreed but maintained the belief that their dog was friendly and not a threat to law enforcement.

Shortly after, the dog escaped from its owner and ran straight at Deputy Driver who was maintaining external security with her partner. In the low light conditions of the night, deputies Driver and Hurst were taken by surprise as they shined their flashlights to see a big pitbull sprinting straight towards them.

The dog went straight for Drivers legs causing her to trip and fall with the snarling animal still coming at her.

Hurst had backed up a few feet and drawn his pistol. He fired twice in the direction of both his partner and the dog. Driver screamed out immediately. Hurst asked if she was ok, not realizing what’d happened, and Driver replied, disbelievingly, that he’d shot her.

Panic clear in the voice of Hurst, he realized what happened and immediately began applying a tourniquet to the injured left leg of Deputy Driver. A splattering of blood visible on the upper thigh of her uniform.

In his panic, Hurst was unable to get the tourniquet applied correctly and another officer stepped in to take over.

The TQ was eventually applied, the wounded deputy was taken into the hospital and released a few days later to recover.

After an investigation, Knox County Sheriff’s Office decided the shooting was considered lawful and just since Hurst was in fear for the life of his partner.

This situation highlights a few key details I think are worth discussing:

Every style of TQ has a special way it should be applied to be as quick, efficient, and effective as possible. Knowing how to properly apply your type of tourniquet is essential for the best possible outcome.

In the case of many traumatic events, there is a substantial risk of fractured bones. If left un-stabilized these fractures pose a risk to the victim. Stabilizing the wounded area with a splint is not only beneficial for maintaining good bleeding control, but also aids in reducing pain and increasing comfort for the victim.

Such as one where an aggressive pitbull is loose, can be dangerous to both the person you are trying to care for and also to you as the first responder. Try to make the scene as safe as possible by removing the threat or retreating to a safe location where you are free to focus closely on the victim.

Trauma medicine in an emergency is as dynamic as the ever-changing situation. the ability to think outside the box and creatively problem solve with limited resources is a trait many medics admire.

You will be better equipped to embody this if you already understand the basics of emergency trauma care.

The Emergency Trauma Response course is %100 free and will teach you the HOW and WHY of using all the items in your trauma kit.