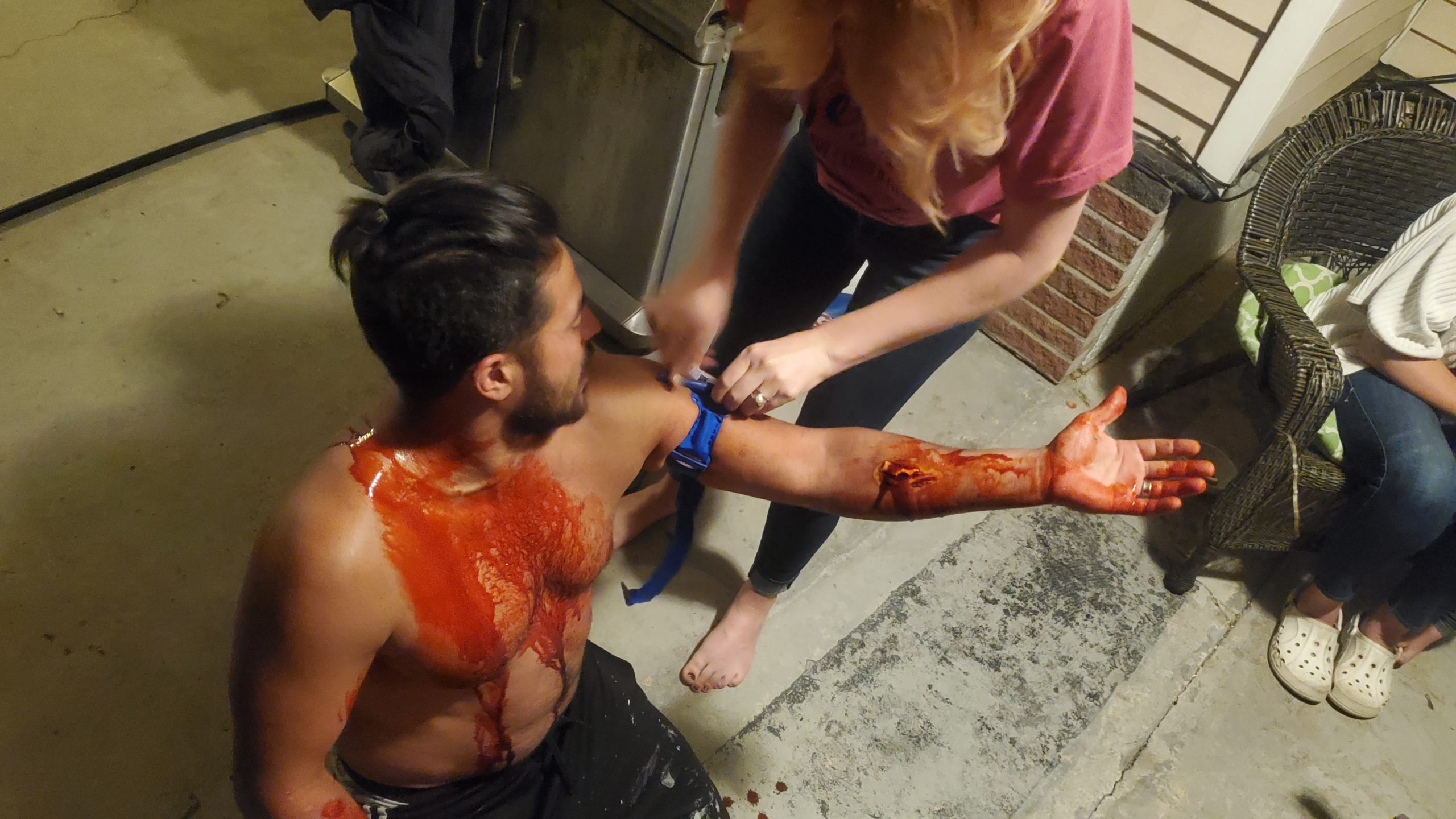 Tourniquets (TQ) have an especially big flaw: They only work on your arms and legs. What if you’re cut somewhere else? What’s your plan for that?

Carrying a CAT for emergencies is great until you trip into a pine tree branch and punch a hole in your neck.

People seem to gravitate to the tourniquet as the only thing they need for bleeding control, but while the TQ is important and effective, you can’t use it to treat other injuries. (Unless we’re talking about the SWAT-T. But I’m staying off that soapbox, for now.)

Here are two good reasons why learning to wound pack is just as important as tourniquet application:

Bleeding control can’t always be accomplished with a tourniquet. In some cases, the wound may be located on a part of the body where a tourniquet won’t help.

“Junctional wounds” refers to lacerations or punctures causing uncontrolled bleeding in areas where two body parts come together, like the groin, neck, or armpit. These wounds are especially dangerous because they can’t be easily controlled with the simple and quick application of a TQ.

To effectively stop bleeding of junctional bleeds, the wound cavity must be filled, or “packed” with gauze and a pressure dressing applied. By filling the cavity with gauze, pressure is evenly distributed throughout the wound and severed arteries are sealed. When these blood vessels are closed, they begin to clot, which further strengthens the bleeding control.

It’s important to note here that you should never remove the gauze from the wound. If you do, you risk pulling out the clot you’ve worked so hard to create. So don’t be tempted to remove the gauze to see if bleeding is controlled underneath.

There are devices called junctional tourniquets, but they’re too large and too expensive for the average citizen to reasonably stock. So, unless you’re a medic with an ambulance full of specialized equipment, wound packing and a pressure dressing is the only effective ways of controlling junctional bleeds.

Not all injuries need a tourniquet, but if the bleeding is very bad and you’re beginning to worry, just use the tourniquet to be safe.

I’ve already written about why tourniquets don’t equal amputation, so if you’re interested, read this article.

Tourniquets are safe to use if the casualty is seen at a hospital within 2 hours of application. So, don’t be reluctant to apply one if you’re worried.

However, if you don’t feel the bleeding is that severe, you may attempt to first pack the wound and apply a pressure dressing instead of using a tourniquet. You probably already know that a TQ works by cutting off all blood supply to the limb. That’s great if the wound is life-threatening, but less desirable if it’s not.

Adequate blood flow to the rest of the limb is important for healing and keeping the surrounding tissues alive, so if bleeding isn’t bad enough to require a TQ, pack the wound and use a pressure dressing. If you do decide to use a pressure dressing, continue to observe the wound site. If you see blood showing through the bandage, upgrade to a TQ immediately because bleeding is still uncontrolled.

Why You Shouldn’t Pack a Chest or Abdominal Wound

Heavily bleeding wounds in the abdomen and chest cavity are very difficult to treat in an emergency setting. There is little you can do besides help the casualty’s comfort and make sure EMS is rolling hot.

Attempting to pack wounds on the torso isn’t advised. Since there’s so much space in these cavities, package after package of gauze can be stuffed in without any pressure being applied to the bleeding artery.

Packing abdominal wounds can increase risk of infection and damage to the digestive system and packing the chest can cause damage and impede the function of the lungs and heart.

A Note About Blood Clotting Agents

Hemostatic gauze, such as QuikClot and ChitoGauze, is saturated with an agent that increases the body’s clotting ability. This is beneficial for encouraging a more robust clot at the end of the severed artery so it acts like a sort of plug and stops bleeding.

With lives on the line, every advantage is exploited, so these are great items to keep handy. That said, don’t think wound packing isn’t effective if you don’t have any hemostatic gauze.

Wound packing with regular gauze is still a great way to control junctional bleeds. Sterile medical gauze is of course preferred, but in an emergency, we don’t usually get what we want.

If you don’t have medical gauze, a soft, absorbent, thin fabric like a strip of t-shirt should do the trick.

Ok, now you know why wound packing is a very important skill to learn, and why it works to control junctional bleeds. You can easily bleed to death from other places on your body and all the TQs in the world won’t help.

Next week I will be talking about how to pack a wound, along with a video demonstration. So be sure to check back in next week.