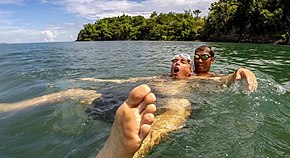 Reporter: “What were you thinking when you jumped in to save them?”

Citizen Hero: “I didn’t. I didn’t think, I just reacted.”

Maybe you’ve heard a statement like this in a news story when a hero leaps into action, and without a thought, puts themselves at great risk to save the life of another person.

While I share the respect and admiration which is only natural to give to someone who risks everything for a stranger, I also understand the nature of emergencies.

Here are some reasons you why shouldn’t try to save someone:

Firefighters, police officers, search and rescue teams, and medics are routinely trained on how to deal with various emergencies and are taught what dangers to be aware of and have procedures in place to help reduce their risk.

It’s unlikely that you are as well trained. And even if you’ve gone through a few courses in the past, you probably aren’t revisiting that training on a regular basis, so anything you’ve learned in the last 10-25 years might be outdated, if you even remember what you were taught.

Professional first responders often run in pairs and have radios and dispatchers to send them additional specialized assistance. Being alone in an emergency is very risky, which is why most professionals run with at least one partner if not a whole team, and with more help only a quick radio transmission away.

You are likely to be completely on your own. Even if there is another citizen nearby willing to help, they probably have even less training then you.

If you attempt a rescue, you may become injured by the very thing that hurt the victim you were trying to save. If you need to be rescued after trying to rescue someone else, you’ve just made the problem twice as bad.

Rescuers who come to your aid may have to divert resources that could have been expended saving the victim, or complicate things so severely that neither of you makes it out alive.

You see someone fall into a swiftly running river. The victim is able to grab ahold of a thin branch hanging out into the water to keep from being swept away but is unable to pull themselves up, or out. Time is a big factor as you realize the victim could lose their grip at any moment and be carried away from all hope of rescue.

You act without thinking. You jump into the river with a confidence that only 3 years of high school swim team brings. But the current is stronger than you expected and despite your efforts, you are carried past the victim, who still clings to the branch. You pull with all your strength for the bank, but your strokes are no match for the river, and you tire quickly in the frigid water.

As your head goes under yet again, you hope someone else saw what happened, but no one did. No one saw you, or the victim fall in. And no one is coming to save you.

This particular example is so common that a person who dies trying to rescue someone (often a child) from drowning is referred to as “AVIR syndrome” or Aquatic-Victim-Instead-of-Rescuer syndrome.

According to the NCBI:

A study, “… composed of a five-year (1 July 2002 to 30 June 2007) total population Australian survey, using the National Coroners Information System to identify cases and an analysis of every immersion rescuer-victim dyad where the primary ‘victim' was a child and where the ‘rescuer' drowned.

This study shows that in 93% of the cases studied, the victim survived while the rescuer did not.

Being the father of three savage little boys who are drawn to water like mice to mousetraps, I could hazard a guess at the level of panic seeing your kid wash downstream.

I understand how some, if not everyone reading this article has shrugged their shoulders saying, “I don’t care, I have to save my baby.” And even if the victim is a complete stranger, some of you are still willing risk everything to help.

I know the kind of people who read this article to the end. We are helpers and protectors, and everyone is just a little safer because we’re ready, willing and able to do the hard things when no one else can, or will. And I’m reasonably certain you are still planning to carry on as before and “Damn the Torpedoes, full speed ahead.”

So, next week I will go over some things I think you should consider before leaping to rescue someone in danger and help increase the chances of success.

5 thoughts on “Why You Should NOT Rescue Someone in Danger”