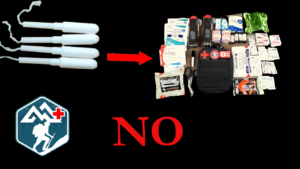 It seems to me that most rumors, if left uninvestigated for too long after being conceived, tend to die long slow, and painful deaths.

One of my favorite topics on this blog is investigating emergency trauma myths and whether they’re worth holding on to.

Some rumors (such as extremity elevation above the level of the heart to reduce bleeding) are actually found to be effective after being studied by health care researchers.

But most rumors (like, “your limb will amputated if a TQ is used”) are false, dangerous, and have killed many people over the years.

In this article we’ll be discussing why Tampons are a

terrible choice to stock in your trauma kit, and some items that will work much better for saving your own life, or the life of a loved one.

Why are People Putting Tampons in Their Trauma Kits?

Critical thinking is the best approach to any new topic worth exploring, but it’s a little difficult with this particular rumor because it seems to make sense.

Here are some of the reasons I hear floating around that justify the use of feminine hygiene products being improvised as trauma gear:

For many years, tampons have been thought as a reasonable way to improvise wound packing, especially for neat little holes in the body like a GSW. Wound packing is an essential trauma skill that addresses life threatening bleeding from junctional wounds, areas where a tourniquet would not work.

Tampons are designed to absorb a small amount of menstrual fluid . According to Ecofemme.org:

“Most women experience a blood flow between 10-80 ml, during 2 to 7 days and the average amount of blood that a woman’s body expels during her menstruation can be found to be 35 ml. That is about 2 – 3 tablespoons (of 14ml) or 6 teaspoons (of 5ml).”

Even at the top end of those numbers, that’s not a lot of blood, especially when compared to how much  blood your casualty could be losing from a true life-threatening bleed.

The average person has approximately 5 liters of blood in their body. 1 liter = 1000 mls and you can lose enough blood to die in as little as 2:30 seconds from a severed femoral artery.

Tampons aren't designed to handle trauma of any kind and won't be adequate to save a life.

Theory #2: As the tampon soaks up blood, it expands, sealing off the wound.

Our goal with bleeding control is not to soak up blood. This does nothing for preventing the death of the casualty we're attempting to save. Our goal is to ensure that as much blood as possible remains in the victims body to sustain life.

A tampon, even if so full of blood it has expanded, is unlikely to exert enough pressure on the severed artery to stop bleeding and produce a robust clot to “plug” the blood vessel. 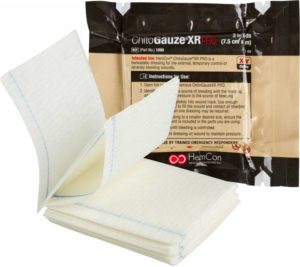 Theory #3: Tampons are sterile and therefore, great for wound packing.

“Yes, they have an expiration date (they’re good for five years). “While tampons are sanitary, they’re not sterile, which means that if they’re not stored properly bacteria and mold can grow,” says La Follette. That shelf life gets even shorter when your tampon is tossed around in your bag for weeks on end.

“That tampon has been in contact with perfume, dust, ink, and other foreign bacteria found inside a purse,” says La Follette. “These types of contamination increase the risk of developing vaginal infections or other complications.”

Your IFAK can be subbed in here for a purse so I’m sure you get the idea that tampons are not packaged to survive the rigors of being jostled about in your kit for months or years at a time.

Additionally, the process of wound packing in an emergency is not a sterile process so this doesn't matter a whole lot anyway. Civilians in America enjoy a speedy transport to a nearby hospital where they can be given aggressive anti-biotic therapy to prevent infections, which is the least of your worries at this point.

Theory #4: Tampons are the perfect size for gunshot wounds (GSW)

This one seems especially reasonable. But which caliber of GSW are you thinking? .22 is very small and I doubt a tampon will fit. If a tampon was to be used in any GSW, it would have to be the right caliber for it to do anything beneficial. A 9mm, or .45 ACP wound might be the right size, but there’s no guarantee you’ll be shot by those calibers.

Also, while the entrance of the bullet might be a neat little hole, the exit wound is more likely to be a large disruption in the tissue, meaning a single tampon isn’t enough to completely fill the wound cavity, necessitating the use of multiple tampons.

I hope you packed enough.

Theory #5: Tampons are cheap, and easy to find

Cheaper than what? Wound packing material, designed to be used for life saving procedures?

Walgreens sells a package of 18 tampons for $6, where as Mountain Man Medical sells Dynarex Compressed Krinkle Gauze for $2.89 with over 4 yards of material.

This gauze is in a durable vacuum sealed package, and is actually sterile, though as we already discussed, infection isn’t high on our priorities list.

Theory #6: A “Special Forces” friend said it was a good idea.

I’ve run into a number of people who claimed to be commandos. After some light questioning, I’m often left doubting they were even in the military to begin with.

But we’ll give your friend the benefit of the doubt and assume he was indeed an elite warrior. This doesn’t mean he’s infallible. Even high-level operators can fall into this trap if they haven’t stayed on top of their training for even a few years.

New medical information is always being produced and it could be that your friend was in the military during a time when this was thought to be acceptable.

Long story short, just because your friend used to be a badass, doesn’t mean they know the latest medical procedures for field trauma care.

4 items that will work better than a tampon:

After the detail I went into here to describe why Tampons are not great for emergency trauma medicine, given no other options, I would still use tampons in an emergency.

If I have nothing else available, I have nothing to lose by giving it a shot, but it wouldn't be my first choice, nor do I think it's a good idea to proactively stock your trauma kit with them.

When stocking a trauma kit before an emergency happens, I'd much rather have the best options available and a dressing impregnated with a hemostatic agent, like QuikClot or ChitoGauze, regular plain gauze, or just strips of t-shirt, would be substantially better.

Improvisation is cool and all, but only when there is no other choice. Never improvise unless you have to.

If you would like to know more about how to save your own life, or the life of a loved one, check out our FREE online Emergency Trauma Response Course.